In ancient times and the Middle Ages, Spelt "Escanda" was grown over a wide range, being the cereal of greatest human consumption. In the first third of the sixteenth century its cultivation began to decay, in competition with maize, cereal of American origin that almost replaced it.

The Asturians baked six cereals: three winter cereals and three summer cereals. The three winters are: spelt, wheat and rye, and the three in summer or summer are: maize, wisin and honeycomb.

The Asturian Escanda can belong to two species: Triticum Spelta and Triticum Diccocum. Different varieties of Spelt are grown in Asturias.

Among all the cereals grown in Asturias, none better rate Ceres (Goddess of Fertility) Asturian as the "Escanda", par excellence the most characteristic of the region.

The collection of the Spelt was carried out separating the spikes from the rod, using it from the mesories or mesories, taking with the chopsticks that are composed, joined at one end by a rope, several stems at a time, and pulling up the spikes, which were thrown into a basket carried by another person behind which he handles the mesories.

The straw, ruthless, mingled with scythe later and stored in the haystack, for food or cattle bed. 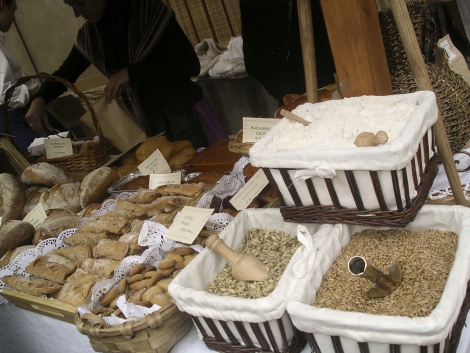 The spikes that were collected with the mesorias were led to the era to be mayaise, that is, beaten with long rods to separate and break the spikes and leave the ergas separated.

Once this was done, the erga scandal was taken to a step where pa poxia (shell covering the grain) was separated from the grain. And finally, in the water mills, you could get the much-prized farina d'escanda.

The last product par excellence that is made with the "Escanda" is the Bread. We leave you a couple of videos about the craftsmanship of said product.